Did the Illuminati get to Thomas Kinkade? That’s the rumor on the internets.

Maybe it’s no so crazy as it sounds. After all, the Illuminati, often hailed as the world’s best-known super-secret society, is capable of lots of things. Zionists who engineered The Holocaust, they’re now godless liberals controlling the world’s most conservative religious zealots. OR, they’re now the powerful conservative religious zealots behind the godless liberalization of modern society. I forget which.

Powerful. Mysterious. And since Thomas Kinkade referred to himself as a “painter of light” — the exact same nickname used by Satan when he was in art school (his third year, I might add) — Kinkade made himself a prime target of the Illuminati.

The rumors include somebody-said-something-and-I-heard type evidence such as “he died from polonium 210 poisoning.” The argument is that such a thing is so rare, only a handful of very powerful people would have access to it.

But… doesn’t that mean that the Illuminati isn’t all that smart? “Let’s use that special poison we have, that traceable but extremely rare one.” What? Isn’t that like saying, “Let’s shoot him with those bullets we had specially made.”?

It’s easy to see why Kinkade’s death brought out the conspiracy crowd and the Illuminati watchers. He was known to put “secret” letters in his paintings. Again — he was famous for this secret thing. It was the letter N.

As the news reports say, we’ll just have to wait for the autopsy result. Of course, the real results won’t be made public, thanks to the Illuminati. 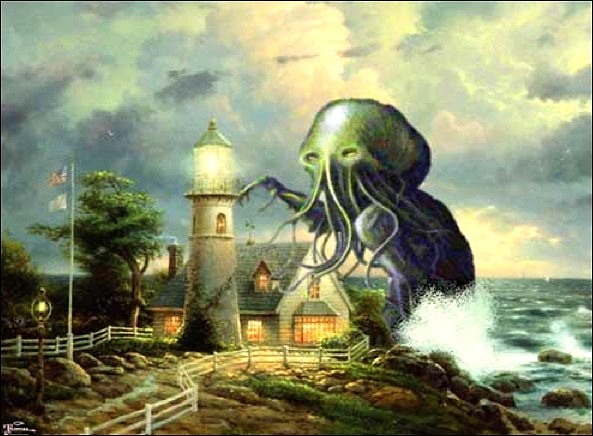