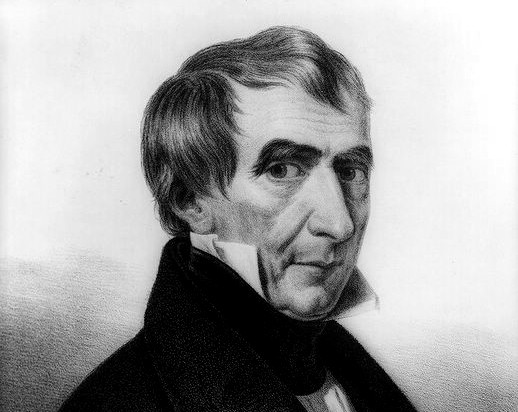 U.S. President William Henry Harrison made history on this day in 170 years ago. How? He became the first president to die while in office.

William Henry Harrison was known for his battles against the Shawnee chief Tecumseh, especially for 1811’s Battle of Tippecanoe. Harrison was elected to be the ninth U.S. president in 1840, and was 68 years old on inauguration day.

That day, 4 March 1841, was a cold and rainy one, but that didn’t stop “Ol’ Tippecanoe” from orating for more than an hour and a half. He got a bad cold. Now, you don’t catch cold from standing in the rain, you catch cold from little tiny unseen bugs. Still, it’s considered common knowledge that Harrison got a cold and then pneumonia, then died a month into his presidency because he speechified too long out in the pouring rain.

Remember, Harrison was 68 years old. His predecessor, President Van Buren, had moved out of the White House a day early, so that the Harrison family would be all moved in by the day of the inauguration. The day before he was inaugurated, William Henry Harrison moved 16 people — kids, cousins, in-laws — into his new residence. They say the first thing he did in his new home was lie down and complain of a headache.

After he was sworn in as president, William Henry Harrison got sick. Then he got sicker. By the end of March the doctors were treating him by bleeding and cupping and calling his illness pneumonia, almost as if they knew what they were doing. On Sunday, April 4th, President Harrison died. Among his last words were “I am ill, very ill, much more than they think me.”

I say this to my family every time I get even the slightest bit queasy, and I get about as much help as President Harrison did.