“Pyongyang rocks like a pendulum do
Soldiers on bicycles two by two
Juche Tower and the big mausoleum
The corpses of dead leaders, that’s where you’ll see ’em.”

The cold was compounded by the fact that none of the buildings we visited were heated, which meant hour-long tours in cavernous, 30-degree indoor environments. It is quite extraordinary to have the Honored Guest Experience in such conditions: they’re proudly showing you their latest technology or best library, and you can see your breath. A clue to how much is really in their control.

My understanding is that North Koreans are taught to believe they are lucky to be in North Korea, so why would they ever want to leave?  They’re hostages in their own country, without any real consciousness of it… The best description we could come up with: it’s like The Truman Show, at country scale. 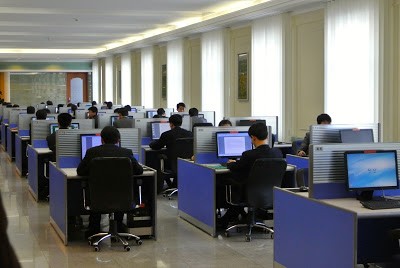 Then there were the oddly staged office and library tableaus:

Looks great, right? All this activity, all those monitors. Probably 90 desks in the room, all manned, with an identical scene one floor up.
One problem: No one was actually doing anything.  A few scrolled or clicked, but the rest just stared. More disturbing: when our group walked in–a noisy bunch, with media in tow–not one of them looked up from their desks.  Not a head turn, no eye contact, no reaction to stimuli. They might as well have been figurines.