I found some drawings of U.S. presidents in the neighborhood. How about a little presidential trivia to go along with them? 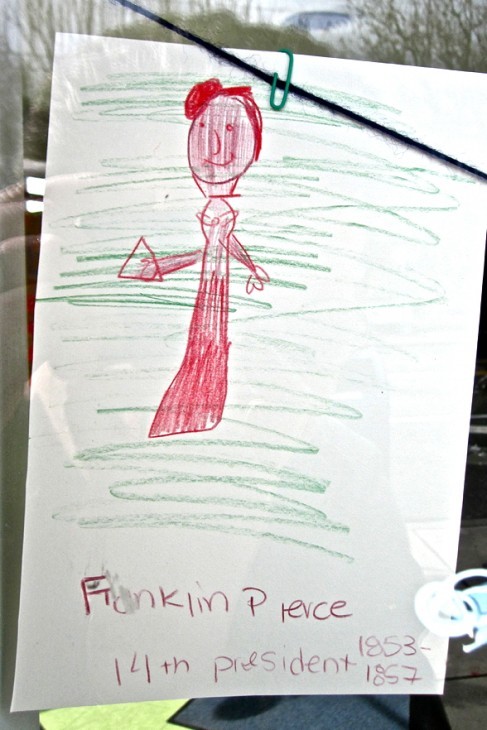 Franklin Pierce was in office from 1853 to 1857. He famously didn’t want to be president, saying the office “would be utterly repugnant to my tastes and wishes.” Nonetheless, the New Hampshire Democrat found himself as the party’s nominee, running against the hapless Republican, General Winfield Scott, and nobody in particular from the Whigs, a party on its last legs.

Pierce won the election handily, without ever making a campaign speech. He was good looking and sociable, with many friends (including former Bowdoin College pal Nathaniel Hawthorne). He liked social gatherings, but his one term in the White House was clouded by tragedy: shortly before his inauguration, Pierce and his wife, Jane Appleton Pierce, witnessed the death of their 11 year-old son in a train wreck. 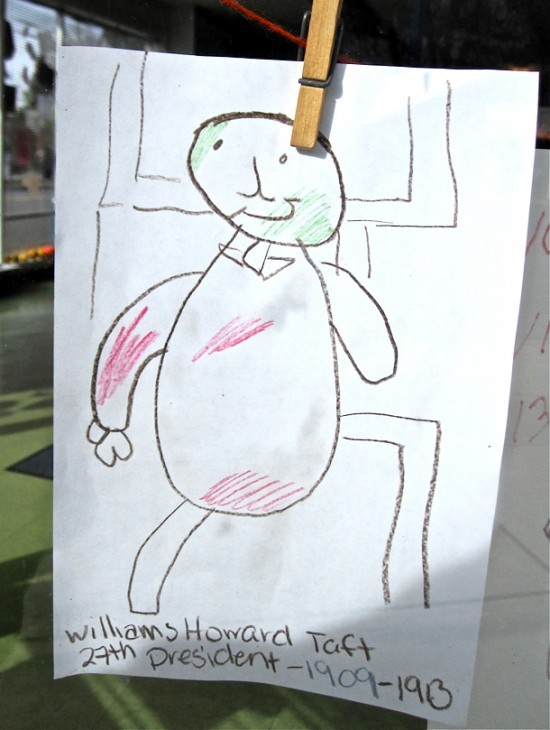 “Big Bill” Taft was in office from 1909-1913. Most people know him as “the fat one.” Taft was over 300 pounds big, and his chosen profession was being a judge. He left that career when President William McKinley put him in charge of the Philippine Commission in 1900. Taft turned down offers of a Supreme Court appointment (from President Teddy Roosevelt), choosing instead to work with the Filipinos.

William Taft was Teddy Roosevelt’s chosen successor, but once Taft was in office their relationship went sour, leading Roosevelt to run against Taft for the presidency in 1912. Taft left office in 1913 (Woodrow Wilson won the 1912 election), calling the White House “the lonesomest place in the world.” He went on to become a Supreme Court judge after all, serving from 1921 until 1930. 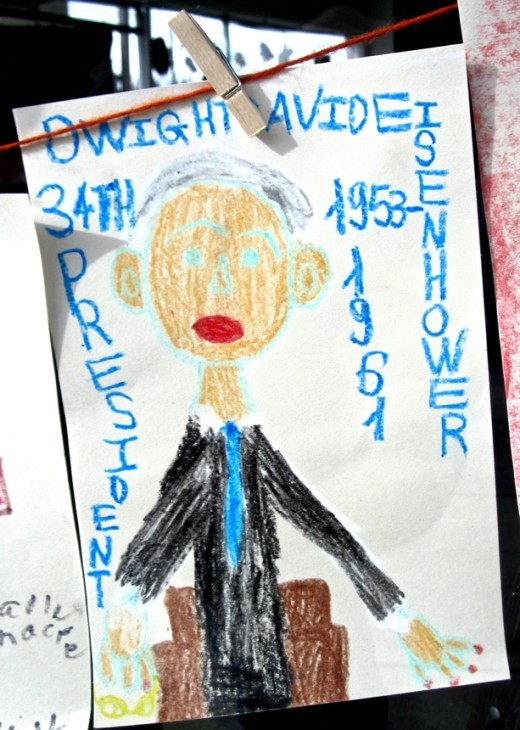 President Eisenhower was in office from 1953 to 1961. The first president from Texas, he was already an internationally famous figure because of World War II. When Eisenhower was a cadet at West Point he played six games of football before breaking his knee in 1912. It ended his football career, but not before he had tackled Jim Thorpe in a game against Carlisle. 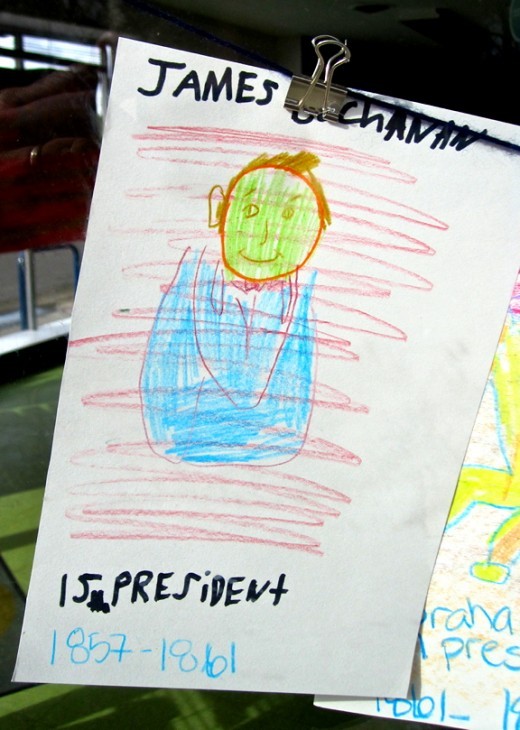 James Buchanan was the president between 1857 and 1861 — that’s just before Abraham Lincoln and the Civil War. President Buchanan is most famous for his bright green face and complete lack of limbs. Okay, that’s not true — the above illustration is taking artistic license. And it’s possible Buchanan has a tail in this drawing, you just can’t see it.

Buchanan was the bachelor president whose nickname was “Old Buck.” Snicker if you will. Old Buck Buchanan spent twelve years running for his party’s nomination. Finally the Democrats gave him the nod. When Buchanan was president, he received greetings from Queen Victoria by way of the first transatlantic cable. The story is that Buchanan didn’t believe it at first — her message asked him to verify his credit card information — and didn’t answer her message until it had been confirmed. The transatlantic cable broke after that and was silent for eight years until it was fixed. Buchanan himself spent 7 years on hold before finally getting tech support on the line. 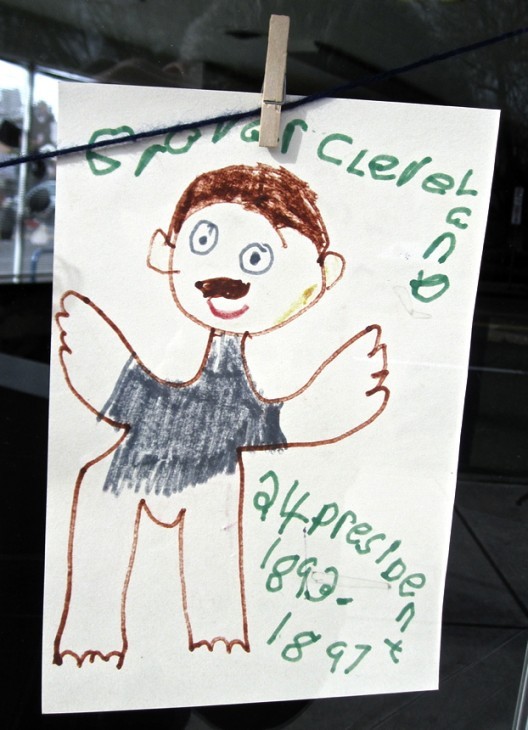 Grover Cleveland served two non-consecutive terms as the president, from 1885 to 1889 and again from 1893 to 1897. His real name was Stephen, but he went by Grover. He was said to have been a hard worker, but one of his own cabinet members once said of Cleveland, “He would rather do something badly for himself than have someone else do it well.” Cleveland is the only president to have been married while in the White House. He married Frances Folsom, the daughter of his best pal and business partner. Imagine that. 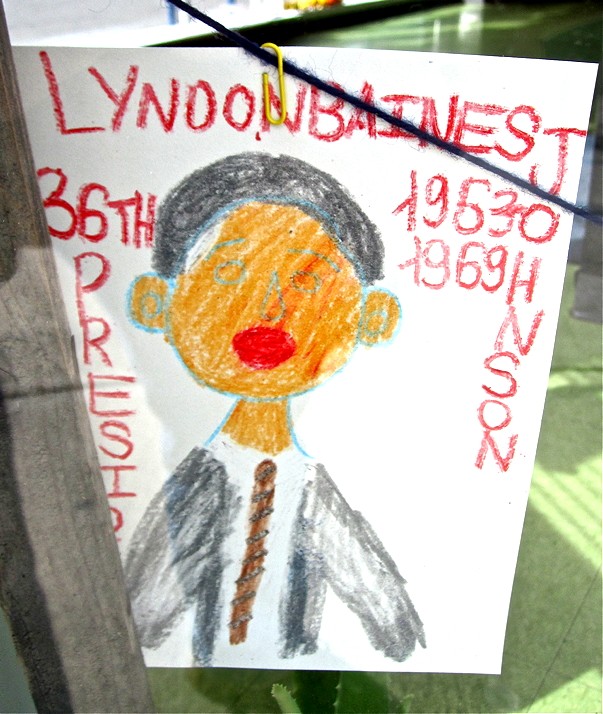 President Lyndon Johnson took office upon the assassination of John F. Kennedy, in November of 1963. Johnson had been Kennedy’s vice president, an unlikely match of Democrats. Johnson was a wartime president, much to his dismay. Helicopters played a big part in the Vietnam War (Johnson’s war), and Johnson was the first president to spend a lot of time in helicopters (President Eisenhower was the first president to use a helicopter — to fly from the White House to Andrews Air Force Base, where Air Force One was kept)/

There’s a story about how an aide to Johnson, just being helpful, directed him — as in, “that’s your helicopter over there, sir,” and Johnson replied, “Son, they’re all my helicopters.” 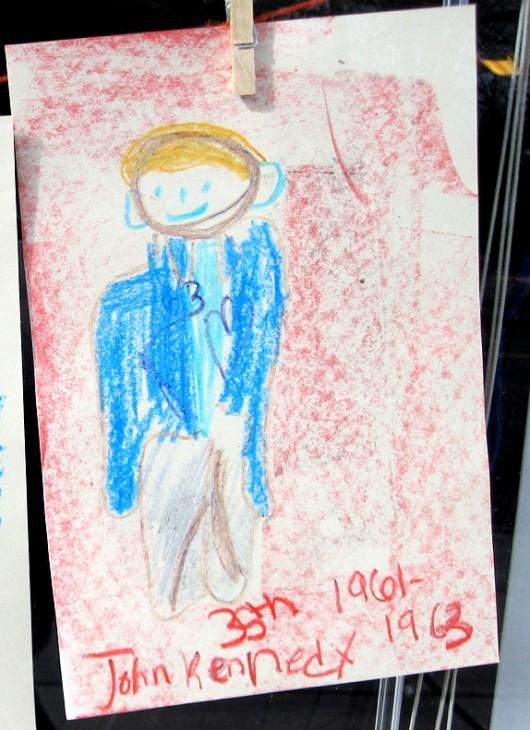 President John F. Kennedy was in office from 1961 until he was assassinated in 1963. Once a symbol of American Hope as channeled through starry-eyed, white Baby Boomers, now President Kennedy is known mostly as the president who almost single-handedly created the conspiracy theory industry.

Kennedy was the first president to be born in the 20th century. He was also the youngest man ever elected to the presidency, at the age of 43. From Eisenhower he inherited a slight recession and, as it turns out, some ill-advised plans for the CIA to lead an invasion of Cuba. That turned out to be right around the height of the Cold War, and Kennedy’s earlier blundering was negated by his tuff-guy handling of the Cuban Missile Crisis in October of 1962.

But then he had an alien love child by Marilyn Monroe, who told Frank Sinatra, who in a pique told the Mafia to hire Nikita Kruschev to make Lee Harvey Oswald shoot Texas governor John Connally, and the bullet ricocheted off of Connaly’s thigh and went right into John Kennedy’s brain and a place in the history books.

Curious about which presidents are on what money? We have that too, in our feature Common Bonds: On The Money.

Tags: Holidays Presidents Presidents Day US History US Presidents
Old Photos of John Glenn
Billy Crystal: How Old Do You Have to Be to Remember Him?