Who2 has a new biography of former U.S. Senator and Almost-But-Not-Quite Secretary of Defense Chuck Hagel. Find out more.

Chuck Hagel is a Nebraskan Republican, and he served two terms as a Senator. While he was a Senator he was on committees whose business was tied to the defense of the United States, but his main qualification seems to be that he is a Vietnam veteran.

Unlike your usual Secretary of Defense nominee, Chuck Hagel’s time in the military was spent as an Army grunt. He and his younger brother enlisted in 1967, an interruption in Chuck’s schooling to become a radio broadcaster. They served together and saved each other’s lives in different combat stories. Chuck Hagel became a squadron leader and a sergeant.

After a brief stint in the radio business, he went into politics, working for the local congressman. That got Hagel into the inside of Washington politics and business. He campaigned for Ronald Reagan, and after Reagan became president, Hagel was appointed to be Deputy Administrator of Veterans’ Affairs.

Hagel was at the VA for only 10 months. His story is that he resigned because his boss didn’t take seriously the concerns of Vietnam veterans over exposure to Agent Orange… which, you know, gave a whole lot of them cancer.

Chuck Hagel made some money in the private sector, in the cell phone business and the electronic voting machine business (!), and he held true to his pledge to Nebraskans that he would only serve two terms as a Senator.

At the end of those two terms, Chuck Hagel came into the spotlight as a harsh critic of the George W. Bush administration’s war in Iraq. A Republican war hero was criticizing a Republican president’s war, and oh, what a kerfuffle!

And it’s hard not to think there was some background psychology there — President Bush had famously checked out of the very same war that nearly killed Chuck Hagel, way back when. Sometimes it seems like all these old fellers are still fighting about hippies and the Vietcong.

In any case, Chuck Hagel has a resumé full of awards and board memberships and all those corporate-slash-government tendrils we’ve come to expect from a guy in his position. Until he was nominated to be Secretary of Defense, he’s never even been accused of being corrupt.

And that accusation came only from a newly-elected, Tea Party Texan who loves the spotlight, as, of course, the Founding Fathers commanded.

So why has it taken so long for Chuck Hagel to be confirmed as Defense Secretary? It sure sounds like it has a lot to do with political theater. The proof of this is that the very same Senators who have publicly opposed Hagel and called him “unqualified,” are on the record as saying Hagel will be confirmed. They just want to put it off as long as possible. Because they hate government waste, or something.

By the end of February this year, Hagel will probably be confirmed as the Secretary of Defense. There are those who think Hagel’s experience as an infantry soldier will make a big difference — Hagel’s got a reputation for being good to veterans. Hagel’s opponents are worried that he’s not warm enough toward Israel. And that maybe he’s not mean enough toward Iran.

But check out this photo, which is Chuck Hagel’s hairy eyeball — and imagine it pointed toward Iran’s President Mahmoud Ahmadinejad: 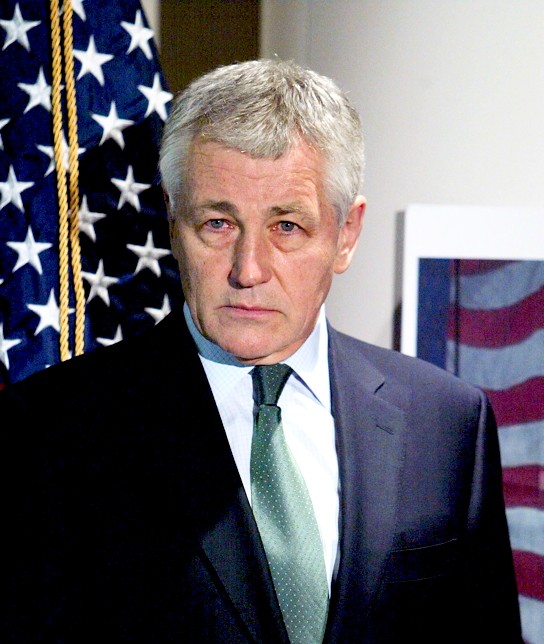 I feel safer already! If you’d like to learn more about this man, read the Who2 biography of Chuck Hagel, and follow the links we’ve provided for more information.