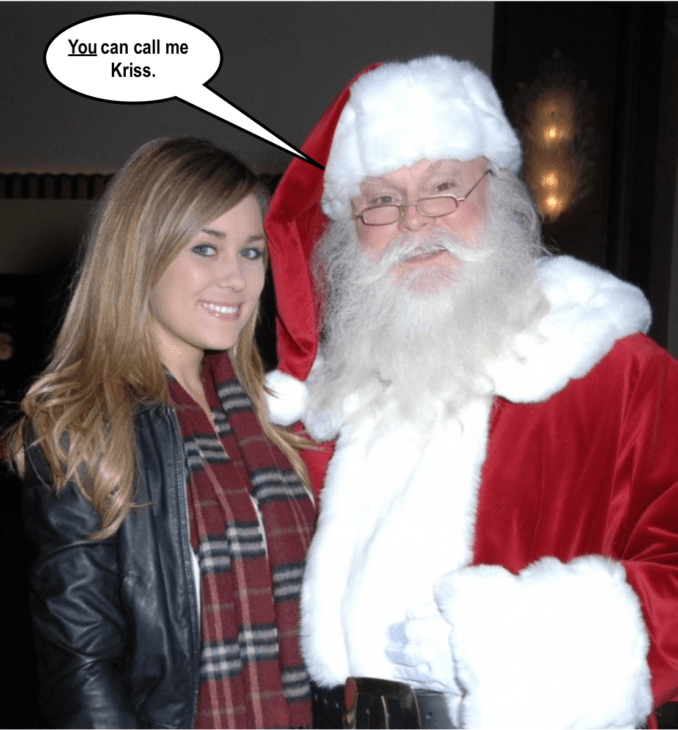 Here you thought it was Kris Kringle. Not so!

The Associated Press has released its 2020 Holiday Style Guide, with spelling and usage notes on everything from Auld Lang Syne (“Sung to greet the new year, poem by Robert Burns set to Scottish music”) to Xmas (“Don’t use this abbreviation for Christmas”).

The AP has this to say about the popular nickname of Santa Claus:

Kriss Kringle, really? I’ve been in the writing business a long time and this is honestly the first time I’ve ever seen that spelling.

The reliable Merriam-Webster dictionary backs the AP up, and so do the Collins English Dictionary and Oxford Reference, home to the Oxford English Dictionary.  Nearly everyone seems to agree that the name is derived from Christkindl, the German word for the Christ child. It’s not clear why Christ should more properly morph into Kriss than Kris, and none of these sources say why that should be so.

A deeper dive by English usage enthusiasts suggests that the first known use of the two-S term was in an 1842 book, titled KRISS KRINGLE’S BOOK, OR SAINT NICHOLAS’ BOOK, FOR ALL GOOD BOYS AND GIRLS. (Review: “The moral tone of the stories is as commendable as the beauty of the execution.”) The same page says that the first use of one-S Kris Kringle came nine years later, in A Christmas Legend, a newspaper story by James Rees. Presumably the AP has decided to ignore as so much Hollywood fluff the many single-S spellings since then in Miracle on 34th Street, beloved children’s novels, and the like.

The AP takes no position on another nickname, Old Saint Nick, but by their logic it’s probably spelled Saint Nickk. Santa is starting to look like a member of Mötley Crüe. (Let’s hope he hasn’t added the tattoos along with the extra S.)

Unlike Kriss. But ah, well: We are all bound by tradition and lexicographical law to do whatever the Associated Press says. So Kriss Kringle it is! We’ll use it and like it, that’s all there is to it.