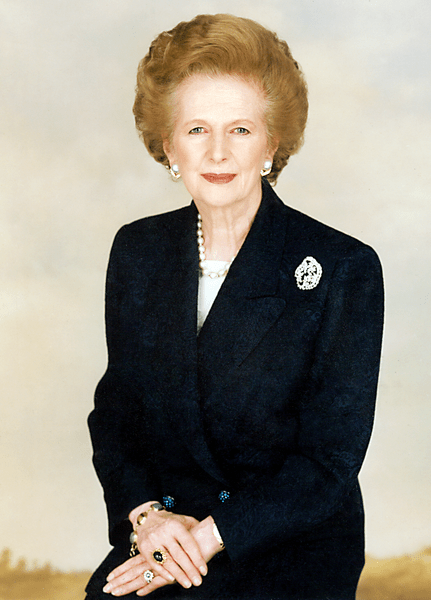 The former prime minister, who served from 1979-90, died “peacefully” this morning after a stroke. 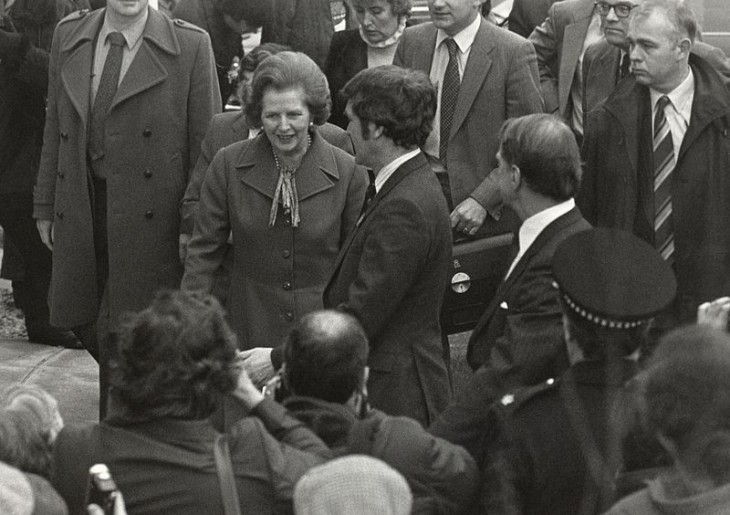 Margaret Thatcher was known as the “Iron Lady” for her overpowering blend of brains, determination and political savvy.  The combination was enough to take her to the top in 1979 as the U.K.’s first female prime minister. (Pretty early, all things considered: the U.S. didn’t even get its first female Secretary of State until 1997.) 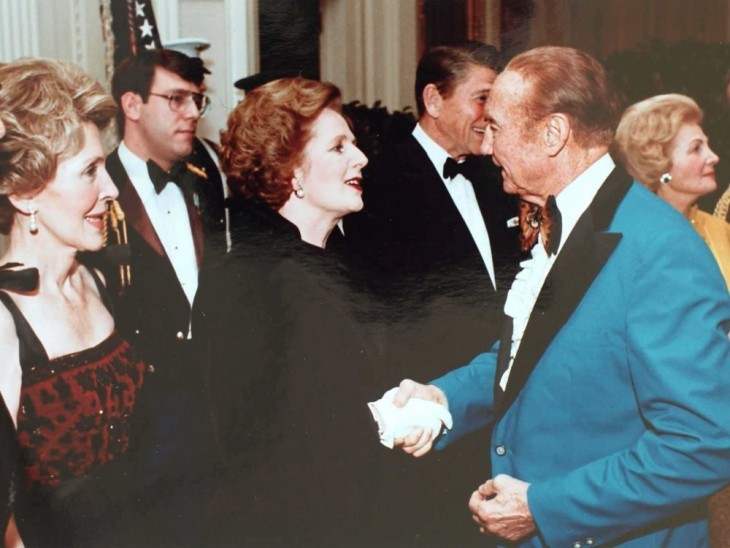 Thatcher had “the eyes of Caligula but the mouth of Marilyn Monroe,” as French President Francois Mitterrand put it in one of those classically Gallic sorta-sexist comments. (Added Sir Bernard Ingham, her press secretary: “She had not merely a film star’s attractiveness; she could also behave like a film star when she chose to do so.”)

Nobody doubted her toughness; the Argentines learned it the hard way during the Falkland Islands War of 1982. 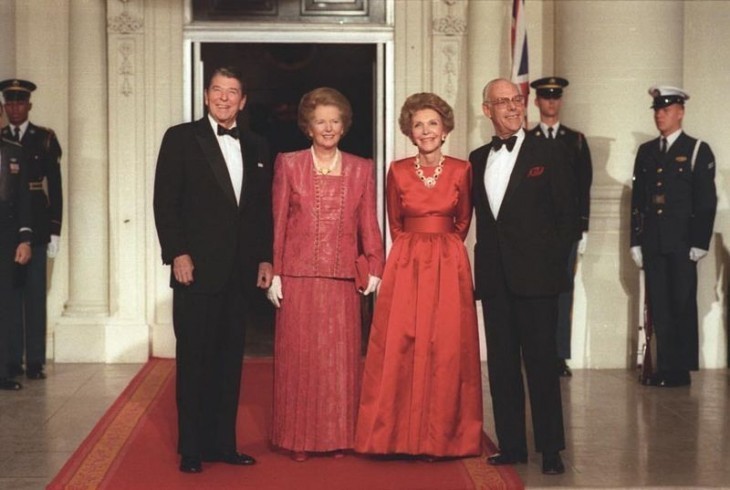 The Falklands War is when she sealed her friendship with a fellow conservative, American president Ronald Reagan. (They’re shown here with spouses Nancy Reagan and Denis Thatcher at a 1988 White House dinner.) Their terms overlapped — Thatcher in office from 1979-90, and Reagan from 1981-89 — and they used those years to steer both countries sharply to the right. 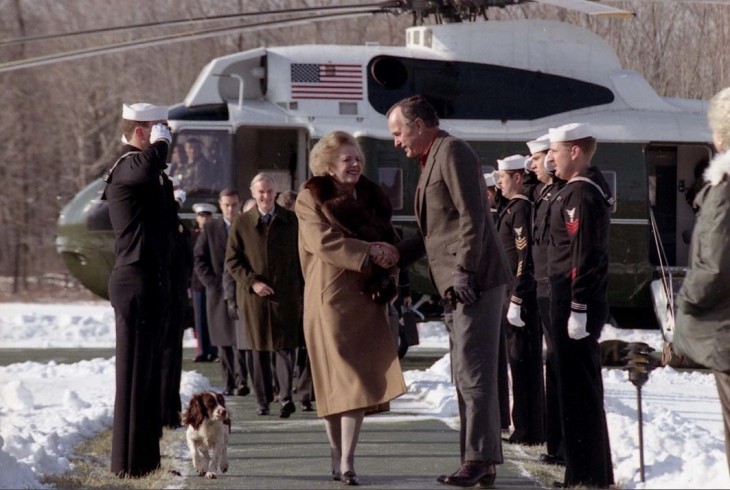 She summed up her political philosophy in 1987:

I think we have gone through a period when too many children and people have been given to understand “I have a problem, it is the Government’s job to cope with it!” or “I have a problem, I will go and get a grant to cope with it!” “I am homeless, the Government must house me!” and so they are casting their problems on society and who is society? There is no such thing! There are individual men and women and there are families and no government can do anything except through people and people look to themselves first.

…There is no such thing as society. There is living tapestry of men and women and people and the beauty of that tapestry and the quality of our lives will depend upon how much each of us is prepared to take responsibility for ourselves and each of us prepared to turn round and help by our own efforts those who are unfortunate. 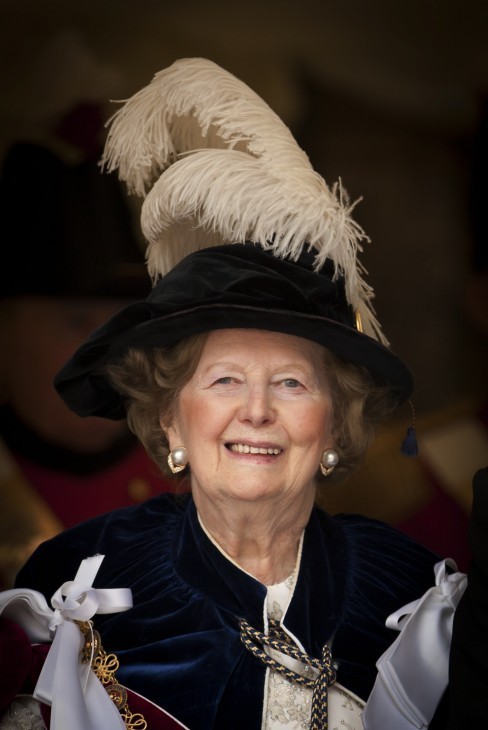 Margaret Thatcher was the longest-serving U.K. prime minister of the 20th century. (Yes, longer even than Winston Churchill, who served from 1940-45 and 1951-55.)
She finally resigned in 1990, bitterly, after losing the confidence of her own party. She was replaced by John Major but also got a great consolation prize: she was “elevated to the peerage as Baroness Thatcher of Kesteven.” She was was given the Order of the Garter — “the highest honour the Queen can bestow on a subject” — in 1995. 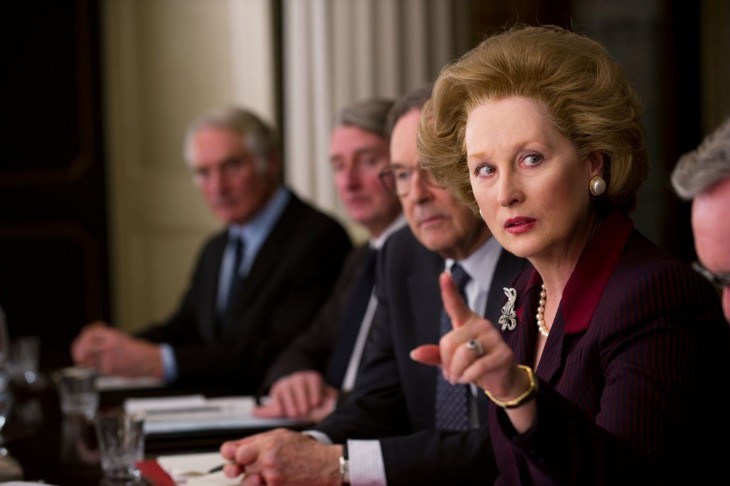 Thatcher also had a fresh burst of fame in 2011, when Meryl Streep played her in the feature film The Iron Lady.  Streep won the Oscar for the role. (So did makeup artists Mark Coulier and J. Roy Helland, who gave Streep that famous Thatcher hair helmet.)

Political positions aside, Margaret Thatcher probably wrote her own best epitaph: “I love argument. I love debate. I don’t expect anyone just to sit there and agree with me — that’s not their job.”