I haven’t had a favorite holiday movie for quite a few years.

The flaws and freaky moral messages of It’s a Wonderful Life have already been picked over like the carcass of the Christmas goose — no need to go into them here.  Holiday Inn I can’t enjoy because of my irrational anger that so many people mistake the lamentable pseudo-sequel White Christmas for the original.

Plus, the endless “comic” mugging of Bing Crosby and Fred Astaire in Holiday Inn is outdone only by the even worse mugging of Crosby and Danny Kaye in White Christmas.  I like Astaire tapdancing with firecrackers, but that only points out that Holiday Inn isn’t really a *Chistmas* movie anyway.  It just happened that Irving Berlin wrote the snow’s snappiest tune for December.

A Christmas Carol really IS one of the best Christmas stories ever, possibly even my favorite Dickens in a 1-2 race with A Tale of Two Cities.  But none of the movie versions slay me, and there are too many of them anyway.  Scrooge is just a little too juicy a role for distinguished actors of a certain age.

A Christmas Story, the perennial post-modern favorite, never made my radar.  Undoubtedly it’s a fun movie, beloved by many, and I’ve seen bits and pieces on TV many times, but Ralphie and his rifle just don’t ring my Salvation Army bell.  And now I must also mark it down a half-point for those faux-replica leg lamps you see for sale everywhere.

Dysfunctional family stories get me down, so throw out The Best Christmas Pageant Ever and its ilk.  Miracle on 34th Street? I dig Edmund Gwynn’s restrained and distinguished (for once) Santa Claus, and I remain fascinated by Natalie Wood‘s strange, solemn little-girl face — the one that will grow up into the headstrong face she wears in Rebel Without a Cause and Splendor in the Grass.  The triumphant millions-of-mailbags courtroom scene is a great Hollywood moment, yes.  But that’s as far as it goes.

Scrooged, the comedy with Bill Murray, was an instant favorite when I first saw it, thanks in no small part to my crush on Karen Allen.  But it hasn’t held up well — such is the curse of all 1980s comedies. (See: Tootsie.) And it’s a snarky comedy, so calling it a holiday favorite is kind of like calling Groundhog Day a holiday favorite.

The truth is, I just sat out holiday movies and TV shows for about a decade there. 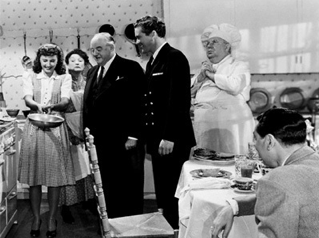 But two years ago, for the first time ever, I saw the 1945 Warner Brothers film Christmas In Connecticut.  And yes, I fell in love.  I’m not sure how I missed it all those years.  I had a vague notion that it was a drawing-room comedy of some kind, something about cooking. Nobody ever raved about it.

And I was vaguely aware that Arnold Schwarzenegger had directed a remake. I see now that it was in 1992, with the bizarre cast of Dyan Cannon, Kris Kristofferson, Tony Curtis and Richard Roundtree. (That sounds like the cast for a *1972* remake, honestly.)  There must be a fascinating tale to how Arnold Schwarzenegger chose a remake of Christmas in Connecticut as the one and only movie directing job of his life.  Given the date, he apparently shot it between Terminator 2 (1992) and Last Action Hero (1993).  I can’t even imagine what he had in mind there. Let’s forget it.

But the original Christmas in Connecticut is a grrrrreat movie, it turns out. I’ve been watching the TV listings for it here this year with no luck — the channels are clogged with White Christmas reruns — so we blew $2.95 for it on pay-per view last night.

Here are seven reasons why I love it.

Reason 1)  Sydney Greenstreet, Sydney Greenstreet, Sydney Greenstreet! He was halfway through his 22-film career — this is #12 — and three years removed from his fabulous turn as Signor Ferrari, the “fat gent” in Casablanca, when he made this film. He’s magazine mogul Alexander Yardley, and his considerable bulk anchors the helium-weight plot that floats around him.  Watching joy and vexation wash across his face — especially in the kitchen, contemplating flapjacks or cold chicken from the icebox — is as pleasant as watching a baby smile in the crib.

Also, respect to his co-star from Casablanca, S.Z. “Cuddles” Sakall, playing his usual cute and addled self.  In Casablanca he’s the comic-relief waiter who says that Rick’s casino is “honest as the day is long.”  Here he’s Uncle Felix, the fretting chef who is the real genius behind Barbara Stanwyck’s recipes.  Sakall can squeeze more wit out of a simple eye-roll than Danny Kaye can get with 20 minutes of rubber-faced frenzy. He and Greenstreet are money.

Reason 2)  Christmas in Connecticut is a holiday movie I’d *actually like to be living in.*

There’s a “breather” scene mid-movie, set in the early evening on Christmas Eve, in the Connecticut country home with an absurdly huge fireplace: two of the company are at one table, casually playing dominoes and drinking cocktails, while an Irish tenor (our hero) plays the piano and sings, and Barbra Stanwyck trims the tree. (How quaint: trimming the tree on the actual Christmas Eve.)  Snow is drifting outside. And it just looks like a GREAT time. 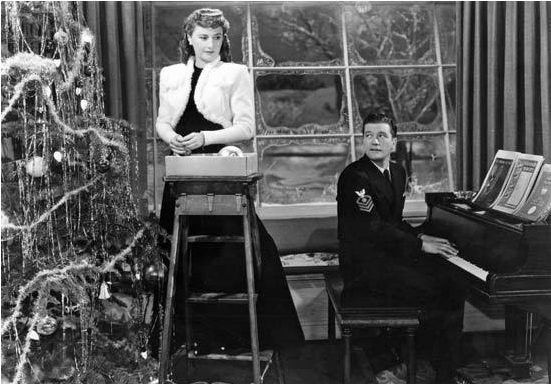 Who doesn’t want to be in a snowy, gorgeous, roomy Connecticut country home on Christmas Eve, where everyone arrives by horse-drawn sleigh, with Uncle Felix in the kitchen cooking a fabulous dinner, while you trim the tree or have a cocktail and soak it all in?

Compare to all those holiday movies that start with the unhappy home, the unhappy office, the unhappy in-laws. Or compare to It’s a Wonderful Life, where (for all its modest charms) Bedford Falls is presented as the place you want to get OUT of.  (When Jimmy Stewart says “I’m shaking the dust of this crummy little town off my feet,” it’s his most brutally honest line in the movie, even if he claims to change his mind in the end.)

The only spot that really looks like a good time in It’s a Wonderful Life is the negative-universe Martini’s bar in Potterville, which is supposed to fill us with dismay but which secretly looks like fun. It isn’t a “nice” place, but it’s noisy and busy and they seem to be having a pretty good time on their way to Hell.  In my personal fantasy version of Potterville, Donna Reed isn’t a spinster librarian — she’s in this bar, wearing something fetching.  But let’s not go there.

Reason 3)  Hearty food galore.  The plot of the story, to gloss it, is that Barbra Stanwyck is a flighty single woman who pretends to be an exquisite chef and homemaker for her popular column in a women’s magazine.

Which means half the movie is spent talking about roast duck, fried chicken, cranberry sauce, stuffing, real plum pudding, cold Chablis, and other fabulous holiday chow. (The “real old-fashioned Christmas dinner” is a running joke that gets thrown in Stanwyck’s face at every turn.) It’s a great little fantasy, all that marvelous food and drink, and adds a swell aroma to the picture. Reason 4)  Barbara Stanwyck.  Oh, she’s scary in Double Indemnity, but here she uses her powers for good.  Watching her little flustered socks-being-knocked-off scene when she first meets the war hero sailor (Jefferson Jones — what a name) is just a delight. She’s funny, she’s sexy, and she manages to underplay the slapstick with the babies just enough to keep it from getting on your nerves. Her light touch makes the movie.

Reason 5)  Dennis Morgan, the Irish tenor and war hero sailor, did his own singing and in real life was married to his high school sweetheart for 61 years. He also sang at Errol Flynn‘s funeral. ‘Nuff said.

Reason 6)  It’s the only Christmas movie in history that begins with a Nazi U-boat torpedoing an American destroyer.

Reason 7)  The true spirit of Christmas is not revealed in this movie.  They don’t even make a pass at it, God bless ’em.  The closest thing to a message is Sydney Greenstreet’s final line: “What a Christmas. What a Christmas!”

And what a Christmas it is.  Look, Christmas In Connecticut is not a famous movie classic of all time.  You could even call it a rehash of the olde Shakespearean setup of mistaken identities, mismatched couples, missing babies, loose cows, inconvenient fiancees being hidden in the next room, love conquering all, etc, etc.

But it has charm, and plenty of it. And it is now my official favorite Christmas movie.