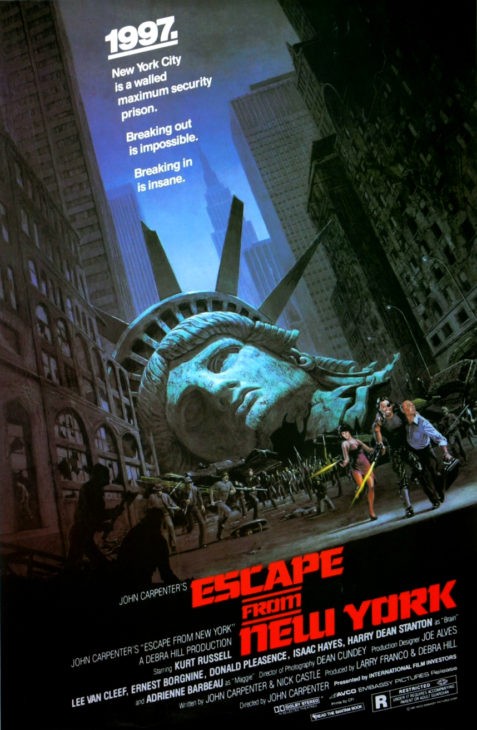 The poster for Escape from New York.

John Carpenter, the director of iconic films like Halloween and Escape from New York, discusses his movies, his career, and his life in this lively Q&A interview with film fanatic Justin Beahm.

The interview was done in 2016. Beahm suggested using a word-association style of interview, which leads to exchanges like this:

CARPENTER: My first studio shoot for Warner Brothers, on a soundstage with a crew, and I was green. It was amazing. I met my first wife, Adrienne Barbeau, on that shoot, and Lauren Hutton gave the performance of her career in that movie. We shot that in no time at all, eighteen days or something, and for hardly any money. It was based on a true life story, about something that happened in Chicago. I learned a lot on that set. Two weeks later I was shooting Halloween.

And this, from the *original* biopic about Elvis Presley:

CARPENTER: My earliest memory of Elvis was the gigantic screenplay. Everybody in town had turned this thing down because they thought it was going to be a piece of [naughty word]. I loved Elvis, and was a big fan. We got this guy I didn’t know named Kurt Russell to play Elvis. That was baptism by fire. We had 180 pages of script, 88 speaking parts, and 150 different locations, all in 30 days. I would never want to work that hard again. I would fall asleep in dailies every day, so I don’t even remember seeing many of them.

BEAHM: Did you shoot at Graceland?

CARPENTER: No, but we went through it. Wow, what a dump. This is where the King lived? We found a location in Long Beach that worked for Graceland.

Who2 doesn’t have a biography of John Carpenter yet, for shame, but he had a truly impressive run of films in the 1970s and 1980s: Halloween (1978) remains a horror classic, Escape from New York (1981) was a B-movie winner, and films like The Fog (1980), Christine (1983, from the Stephen King novel) and Big Trouble in Little China (1986) were all crowd-pleasers. Starman (1984) was an underrated sci-fi romance with Jeff Bridges and Karen Allen.

Carpenter’s truly hot period ran for about a decade, from 1976 (Assault on Precinct 13) to 1986 (Big Trouble in Little China). But he continued to make films through The Ward in 2010 (which starred Mamie Gummer, daughter of Meryl Streep). He has a lot to be proud of there.

Great interview, recommended for fans of John Carpenter or filmmaking in general.