A dalliance with Monica Lewinsky almost ended Bill Clinton‘s presidency. But he’s not the first American president to chisel himself a spot on the Mount Rushmore of Infidelity.

Did THOMAS JEFFERSON secretly father children by his own slave, SALLY HEMINGS? Such rumors were first published in 1802 by a political rival of Jefferson, James Callender. Jefferson was a widower and Hemings was herself the daughter of a female slave and Jefferson’s father-in-law.

For years, historians tended to dismiss the rumors as scurrilous gossip spread by Jefferson’s enemies. Until 1998, when DNA testing on Jefferson’s descendants showed that the president or one of his close male relatives was highly likely to be the father of Hemings’s last son, Eston.

A later study by the Thomas Jefferson Foundation also concluded that Jefferson was likely the father of at least one of Hemings’s six children, and possibly all six.

Ten years before GROVER CLEVELAND first ran for president, a Buffalo store clerk named Maria Halpin named him as the father of her illegitimate son. Cleveland didn’t deny the charge, and the child was quietly given up for adoption.

During the 1884 presidential campaign a Buffalo newspaper dug up the story, which Grover Cleveland then — remarkably — admitted.

His opponents attacked with chants of, “Ma, ma, where’s my pa? Gone to the White House, ha ha ha!” But the big man survived and was elected with a slim 62,000 vote margin.

WOODROW WILSON caused a public scandal simply by getting engaged.

The president’s wife of 29 years, Ellen Axson Wilson, died in August of 1914. She had been First Lady for 17 months.

Seven months later, in March of 1915, Woodrow Wilson met a widow named Edith Bolling Galt. They hit it off so quickly that the president proposed in May.

In an era when a year of mourning was traditional in high society, plenty of nasty gossip followed about Wilson’s ‘disrespect’ for his first wife. Crazy rumors even surfaced that Wilson had murdered his wife, or had been having an affair. No matter: Galt accepted the proposal and she and Wilson were married that December.

WARREN HARDING got around. One mistress, Carrie Phillips, took $20,000 in hush money from the GOP while Harding ran for president in 1920. Another, Nan Britton, allegedly bore Harding’s daughter in 1919 while he was a senator from Ohio.

After Warren Harding became president he continued to ‘entertain’ Nan Britton, sometimes in a small anteroom just off the Oval Office.

After Harding’s untimely death in 1923, Britton wrote a bestseller, The President’s Daughter, making public her claims that they had carried on for six years and that her daughter Elizabeth Ann Blaesing was Harding’s child.

For many years the allegation went unproven, but in 2015, Harding’s descendants announced that DNA testing showed that Britton’s daughter Elizabeth was indeed Harding’s biological child. As reported in the New York Times on August 12, 2015:

“We’re looking at the genetic scene to see if Warren Harding and Nan Britton had a baby together and all these signs are pointing to yes,” said Stephen Baloglu, an executive at Ancestry. “The technology that we’re using is at a level of specificity that there’s no need to do more DNA testing. This is the definitive answer.”

She threatened divorce, and Franklin Roosevelt agreed to end his affair with Mercer… but the relationship began anew sometime later and continued even while he was president.

Lucy Mercer was with Roosevelt when he died in Warm Springs, Georgia in 1945, but this (like the affair itself) was kept hidden from the public until it was finally revealed in news reports in 1966.

She was Irish and had driven ambulances in London during the Blitz — she was first assigned to drive Eisenhower (then a major general) in 1942. Summersby became Eisenhower’s permanent driver and, later, his secretary. Ike had been married to his wife Mamie since 1916, but hey, it was wartime.

Years later, President Harry Truman later told an interviewer that Ike had planned to divorce his wife and marry Summersby until his boss, General George Marshall, threatened to bust him out of the Army if he did.

The rumor stayed mostly under wraps until 1975, when Kay Summersby, who was dying of cancer, published a tell-all memoir titled Past Forgetting: My Love Affair with Dwight D. Eisenhower. In that book she made it clear that they had a love affair, though she also noted that with him being supreme commander of allied forces, opportunities for physical contact were rare.

Who hasn’t heard the tabloid rumors about JOHN F. KENNEDY?

Always a ladies’ man, Kennedy had a boatload of girlfriends before marrying Jacqueline Bouvier in 1953.

After their marriage, JFK reportedly continued to see other women, supposedly even sneaking them into the White House. (Mafia moll Judith Exner and actresses Marlene Dietrich and Marilyn Monroe are some of the wilder alleged partners.)

At first a great secret, such rumors have since gotten wide public airing, and even Kennedy’s friends seem to have stopped denying many of the tales.

JFK’s close aide Ted Sorensen, in his 2008 memoir Counselor, admitted that he was aware of “a few flings and fancies along the campaign trail.” Sorensen insisted that JFK was not as promiscuous as many claimed, but also said “JFK had many virtues, and would probably have been a less interesting man if he had no vices.”

BILL CLINTON certainly had the best-publicized affair of any sitting president. So far.

From November 1995 to March of 1997, Clinton had a series of brief sexual encounters with White House intern MONICA LEWINSKY. The incidents took place in or near the Oval Office. (Shades of Warren Harding and Nan Britton!) Clinton was, of course, married to First Lady Hillary Clinton at the time.

The affair became public in 1998 thanks to the unrelated case of Paula Jones, who was suing Clinton for sexual harassment while he was governor of Arkansas. During a deposition in that case, Clinton denied having sexual relations with Lewinsky; his denial, among other things, led to Clinton’s impeachment for perjury and obstruction of justice.

It also led to the 453-page Kenneth Starr report explicitly detailing Clinton’s meetings with Lewinsky — a landmark document in the history of presidential peccadilloes — and to the impeachment of Clinton and a U.S. Senate trial. Clinton was acquitted, but not before the scandal had dominated public discussion for more than a year.

For a full history of the case, see the Washington Post’s extensive report titled Clinton Accused. 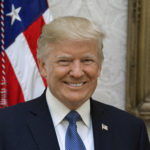 DONALD TRUMP was elected president in November of 2016 despite the release, one month earlier, of a video in which he made remarkably crude remarks about women to Access Hollywood correspondent Billy Bush:

Early in 2018, a Wall Street Journal story revealed that Trump’s lawyer Michael Cohen had paid adult film star STORMY DANIELS $130,000 just before the 2016 elections. The reason: to keep her quiet about a sexual affair she said she had with Trump in July of 2006, a year after his marriage to Melania Trump and just months after the birth of their son, Barron.

Trump denied the allegation, but in August of 2018 Michael Cohen reached a plea deal with federal prosecutors, admitting that he had given the money to Daniels at the direction of Trump in order to influence the outcome of the election.

Remarkably, with both the Senate and the House controlled by his fellow Republicans, Congress took no action against Trump and he remained in office. Later in his term Trump was impeached twice for matters unrelated to his sex life.

Plenty of old presidential dogs have married much younger women — including Grover Cleveland, who married a woman he had bounced on his knee as a baby. Learn more in our lively list of MAY-DECEMBER PRESIDENTS »