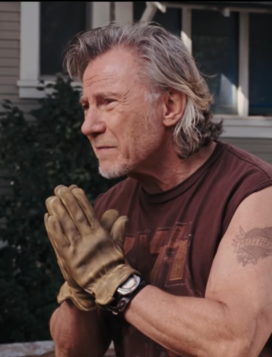 Keitel grew up in Brooklyn and was in the U.S. Marines in Lebanon (1958) before becoming a member of New York’s Actor’s Studio. He appeared in Scorsese’s first feature, Who’s That Knocking At My Door (1967, also titled I Call First), then led the cast of Mean Streets (1973), then played young Jodie Foster‘s pimp in Taxi Driver (1976) — all  breakthroughs for Keitel, Scorsese and young Robert DeNiro.

Keitel then furthered his reputation as an intense portrayer of complex characters in Ridley Scott‘s The Duellists (1977), James Toback’s Fingers (1978) and Paul Schrader‘s first film as director, Blue Collar (1978, with Richard Pryor and Yaphet Kotto).

During the 1980s he made movies in Europe and stepped out of the limelight, then turned in a sturdy performance as Judas in Scorsese’s The Last Temptation of Christ (1988).

His career as a reliable character actor took off in the early ’90s, with roles in Thelma & Louise (1991, with Geena Davis and Susan Sarandon), Bugsy (1991, Oscar nomination) and The Piano (1993, starring Holly Hunter).

Keitel also played Mr. White in Tarantino’s Reservoir Dogs (a film he helped finance), Mr. Wolf in Pulp Fiction, and a twisted cop in Bad Lieutenant (1992). Despite a solid reputation as a dramatic actor, Keitel has had success at comedy as well, including 1992’s Sister Act (with Whoopi Goldberg), 1995’s Smoke (with William Hurt) and, once again opposite DeNiro, Little Fockers (2010, starring Ben Stiller).

Keitel is also in the Beyoncé video, Pretty Hurts.

Keitel was married to actress Lorraine Bracco from 1982 until 1993.

Something in Common with Harvey Keitel