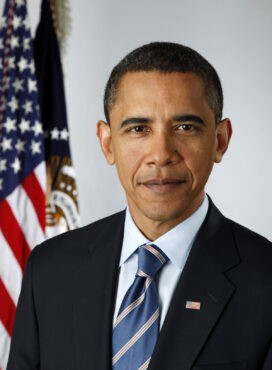 Barack Obama was president of the United States from 2009-2017. He was the 44th U.S. president and the first Black president in American history.

Barack Obama has spoken often of his multicultural background: his father was from Kenya, his mother from Kansas, and they met at the University of Hawaii. After his parents divorced and his father returned to Africa, Obama stayed with his mother and was raised in Indonesia and Hawaii.

Obama earned an undergraduate degree from Columbia University in 1983 and a law degree from Harvard in 1991. He then joined the Chicago law firm of Miner, Barnhill & Galland, which specialized in civil rights legislation. He also taught constitutional law for 12 years at the University of Chicago. Barack Obama was elected to the Illinois Senate in 1996, and then to the U.S. Senate in 2004, beating Republican candidate Alan Keyes.

Barack Obama shot to national fame after delivering a stirring keynote speech in support of nominee John Kerry at the 2004 Democratic national convention. Obama ran for president in 2008, defeating a Democratic primary field that included New York Sen. Hillary Clinton, the former First Lady. He named Delaware senator Joe Biden to be his running mate at the Democratic Convention that August, and they defeated Republican nominees John McCain and Sarah Palin in the November general election. Obama took office as president on January 20, 2009.

Barack Obama ran successfully for re-election in 2012, defeating Republican candidate Mitt Romney on November 6, 2012. U.S. presidents are limited to two terms, so he did not run again; he was succeeded by Republican Donald Trump on January 20, 2017.

Barack Obama published the personal memoir Dreams from My Father in 1995, and published a second book, The Audacity of Hope, in 2006. The title of the latter book was also the title of his 2004 keynote speech, and both books won Grammys for best spoken word album. Obama was awarded the Nobel Peace Prize in 2009, for “his extraordinary efforts to strengthen international diplomacy and cooperation between peoples.”

Barack Obama married the former Michelle Robinson in 1992. They have two daughters: Malia (born in 1998) and Sasha (b. 2001)… Barack Obama’s father, also named Barack Obama, was black; his mother, Ann Dunham, was white. Obama’s grandmother on his mom’s side, Madelyn Dunham (nicknamed “Toot”), died the day before Obama was elected in 2008… Barack Obama attended Occidental College in Los Angeles before completing his undergraduate degree at Columbia… Barack Obama’s Senate website described him as “the first African American president of the Harvard Law Review” and “the third African American since Reconstruction to be elected to the U.S. Senate.” The previous Black senators elected by popular vote were Edward Brooke (1967-79, from Massachusetts) and Carol Moseley-Braun (1993-99, from Illinois). Two other Black Americans were chosen by state senates to become U.S. Senators: Hiram Revels (1870-71, from Mississippi) and Blanche Bruce (1875-81, also from Mississippi)… Barack Obama’s 2008 Grammy for The Audacity of Hope beat books by two former presidents: Bill Clinton‘s Giving: How Each of Us Can Change the World and Jimmy Carter‘s Sunday Mornings in Plains: Bringing Peace to a Changing World.

Something in Common with Barack Obama